Navigating the economic implications of COVID-19 › There’s been a lot of talk regarding the Rule of 40 in the last couple of years and for very good reasons as well. There is a wide expanse of SaaS metrics that are utilized out there in the world today, which are useful for internally tracking performance as it enables companies to personalize metrics that reflect their own operating realities. The Rule of 40 is one of those metrics but offers a faster solution. In this article, we’re going to go over the ways on how to calculate this formula and talk about its benefits and disadvantages as well. 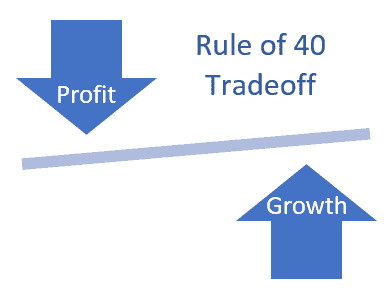 The Rule of 40 first garnered public notice when Brad Feld, the founder, and investor of Techstars, published The Rule of 40% for a Healthy SaaS Company.

The Rule of 40 states that a company’s revenue growth should be equal to or even greater than 40% along with its profitability margin. SaaS management teams are typically opting towards either increased profitability or rapid growth, which is exactly why the Rule of 40 has become a standard to establish a balance between these two phenomena.

In other words, the Rule of 40 is a general rule of thumb and analyses the well-being of a SaaS/software business. The formula for this is rather simple:

So which percentage of profit margin and growth rate should we use? Although every business is unique, many thought leaders cohesively agree on using Annual Recurring Revenue (ARR) or Monthly Recurring Revenue (MRR) for growth rate. Now, if we were to join the growth rate from any one of those along with the EBITDA (Earnings Before Interest, Taxes, Depreciation, and Amortization) margin at the same time, we’ll be able to see whether the product measures at least 40.

Some businesses find it more comfortable to use their operating income or free cash flow (FCF) margin rather than the EBITDA margin. This means that the addition of profit and growth rate adds up to 40%. Let’s say if your company is growing at 20%, then this could imply that you’re generating a profit of 20% at the same time. But, if you’re growing at 40%, then you’re generating 0% profit. And if you grow at 50%, it would result in a 10% loss.

It should be noted that the Rule of 40 doesn’t necessarily let you know whether a company at its early stages is profitable enough or going to grow quite enough. Fortunately, there are other metrics that can help us understand the question much better. The Rule of 40 is instead a measure of the balance between profitability and growth, which also lets us know about a business’s sustainability.

Key Drivers of the Rule of 40

The Rule of 40 is driven by two key factors, including:

There are a variety of ways that companies can measure growth rate. With the most recurring and easiest to apply from one company to another being the year-over-year growth percentage based on GAAP revenue. The GAAP revenue is almost never wrong and is consistently used for comparison. But while this certainly fits for the more established SaaS companies, the developing ones, on the other hand, rely more on ARR or MRR growth.

To be blunt, these renowned growth measures can allow companies to calculate their Rule of 40. However, there is a certain caveat to bear in mind, which is that doing so can create an awkward basis for comparison between the companies. If one was to envision a perfect world, both ARR and MRR would be considered consistent methods in recognizing GAAP. Sadly, especially in the building faces, this isn’t the case with most SaaS businesses.

This factor is usually the trickiest since there isn’t any commonly agreed measure of profitability. Operating income, EBITDA, the net change in cash, cash from operations, and unlevered free cash flow, are different profitability measures and are legit factors to be utilized in the RO40 calculation process.

In other words, there is no “one way” to utilize profitability measures for the calculation and tracking of RO40. All the measures mentioned above are correct. What’s more, is that each of those measures offers different types of results, which at times, can be very meaningful.

When do SaaS Companies Utilize the Rule of 40?

SaaS companies that have recently been introduced to the market should be concerned about the Rule of 40. Also, they should instead focus more on T2D3. This is a method that instructs you to triple your revenue/size for two straight years. And then have it doubled for three straight years. Only then will it be possible for you to utilize the Rule of 40%.

According to Feld, the Rule of 40 – despite generally being used by SaaS companies that have at least $50 million in revenue – can be used once a business has at least $1 million MRR. However, others like Tomasz Tunguz say that applying the Rule to a business in their early days can lead to confusing results. Sometimes even higher than 100% or even 189% like the 2010 Workday case. Tunguz says that waiting in the fifth or sixth year when a business has acquired at least $50 million worth of revenue, is a more strategic approach.

If you operate a SaaS business that is still developing, then you must realize its product-market fit, and help it grow as fast as you can. Obviously, there isn’t only one strategy that will guarantee success. However, many experts suggest SaaS companies should aim for growth for the time being.

Who Needs This Rule?

According to the ways of structuring the Rule, it only applies to software companies and for a simple reason at that.

Venture Capitalists, who want to see whether or not they should invest in a business, typically do the calculation for this Rule.  It enables them to balance growth and profit even if there isn’t any growth or profit. Venture capitalists typically look for a score that is at least 40. A score somewhere between 40 and 60 is regarded as outstanding. However, any business that scores under 40 has failed the test. This Rule actually works best for fresh, developing businesses with great ideas but have yet to prove anything.

The main purpose of using the Rule of 40 is not only to analyze growth and profit. But to understand their tradeoffs with one another. If, for instance, a company displays rapid growth, the investors may be willing to be patient. Even with low profits and perhaps even net losses. This is usually the thing with fast-developing companies that are engrossed in research and development.  they are not that fascinated with short term profitability. Usually, any business that shows negative profits is a bad sign. But not when it comes to the SaaS community, especially if a business shows amazing growth.

Does it apply to Fresh and Developing Businesses?

The Rule of 40 does not apply only to fresh or developing businesses. It is, because, it applies mainly to the larger and more established ones. The bigger companies have higher profit margins and a slower growth rate. It’s not hard for bigger companies to outdo the Rule in under a year. Still, it’s difficult to maintain that kind of performance on a yearly basis. The reason behind the case is that it becomes hard to manage the business growth. This is when large portions of profits are seen.

Software companies usually come with large margins that can, at times, go up to 80 or 90%. However, other types of subscription business – that sell wine subscription. For instance – have relatively lower margins than software businesses since their COGS features purchasing wine from producers. On the other hand, there is virtually no cost involved when serving a new customer using ongoing software.

At What Time Period Measurement Should Take Place?

Another common question on everyone’s mind is to know the time period for measuring after using the Rule 40. For most businesses, the general Rule of thumb is to measure year-to-date or quarterly. However, other methods have surfaced since then.

Techstars co-CEO David Cohen says that even though investors usually give credit 12 months ahead when they evaluate a business consistently, someone who wants to buy a business might be interested in the last 12 months. That’s why when you calculate your business’s position within the Rule of 40 for a potential buyer, it’s essential to measure the revenue from the previous 12 months. Avoid using the Rule of 40 as a future valuation predictor.

There are a number of varying opinions when it comes to using the Rule of 40 to make year-over-year comparisons. While it isn’t uncommon for successful businesses to acquire a measure of at least 40 in under a year. It’s quite a rare feat and maintains the metric for several consecutive years, even for bigger firms. If there are any fluctuations in the formula, they are probably due to several things. It includes changes in the business that are likely going to become positive in the long run. If you’re going to make YoY comparisons with your RO40 results, you need to interpret these results along with other indicators and metrics.

When numerous SaaS businesses became aware of the Rule of 40, they wanted to know how they could “be” it. This is something that has investor and technology executive Dave Kellogg worried as he explains in “An update on the SaaS Rule of 40“:

He says that companies usually target Rule of 40 early on and as a result sacrificed their growth and harm their valuations and fail at delivering high growth as well as not getting the cost efficiencies of customer acquisitions that were built in their financial models, which as a result leads to spreadsheet-induced hallucinations.

A SaaS capital blog post agrees with the sentiment asserting that this metric isn’t for everyone. Also, mentions that it may not be productive to consider it if there isn’t any market opportunity available. Because of the fact that every company is unique, the Rule of 40 dissuades startup companies from setting sites on big customer acquisition that they need to corner market, or even prompt others to accelerate product development that doesn’t even consider their target audience.

Words from the wise – Greg Sands, a startup investor

Greg Sands, a startup investor also gives his two cents on the matter with his post called “What the ‘Rule of 40’ Means at the Early‌ ‌Stage“. Over here, Greg aims to remind entrepreneurs that good investors should truly value an owner’s understanding of unit economics. Also, the ability to be profitable as well as having the capability to analyze a business and explain the tradeoffs.

Even so, those companies that have succeeded in the early stages are also curious to know about it. Also, will want to see how they can utilize the Rule of 40 to their advantage. Anticipating this, Bain & Company has already prepared a well-structured breakdown of various scenarios showing startup companies how big can conquer Rule 40 as they mature. Some of the most important points include:

The Rule of 40 is an excellent tool that will give you just the insight you need for two reasons. Whether you’re looking to get more investors for your business, or you want to measure the performance of your company. It will also let you know whether it is worth sacrificing short-term profitability for immediate growth. It’s not perfect, and there will be Financial risks involved. Ther be sure that it is exactly what you need for your situation.